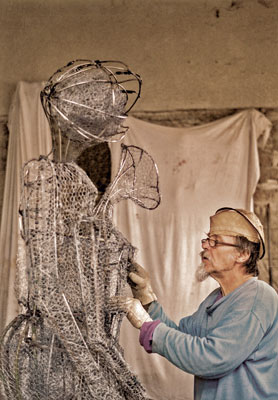 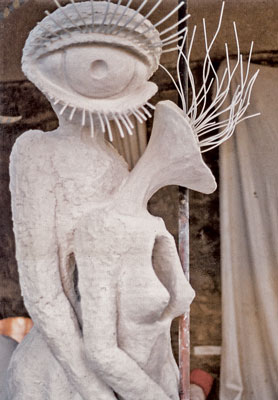 The bronze statue The Seekers (2005–2006) was created in Kristek’s studio in Podhradí nad Dyjí. In its conception, we find the culmination of the idea for the entire journey through places of pilgrimage. Its name indicates that the path of knowledge never ends, and it constantly reveals new horizons.
In 2009, the statue was stolen. Its remnants stayed at the station as a memento for years. But they also represented a challenge to continue in the never-ending cycle of creation and destruction of forms.
In 2015, Kristek created a sculpture sequel The Seekers – Organic Forms thanks to the financial support of the municipality of Sekule. He continued to develop his original idea. From the remnants of the stolen sculpture, a new plant-life form has grown. The male and female again share one heart. The story goes on... 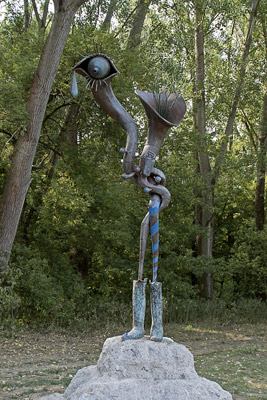 Kristek’s statue The Seekers consists of an integration and intertwining of the body of a man and woman, symbolising the confluence of the Thaya and the Morava. The bodies of the man and woman grown together share one heart – the home to the soul, feelings, consciousness and courage. At the same time, it is the centre of man and the world. The form and place where the statue is located make up the meeting point of the Czech Republic, Slovakia and Austria. There are peepholes in the heart of the statue. If you look through one peephole, you can see two birds on the other side of the river. The same effect is repeated when one looks in other directions. And so the heart with the peepholes and the birds links the three states. Kristek’s statue The Seekers is the conclusion to the Thaya Glyptotheque. The statue contains the cyclical message of return and periodic regeneration of the past according to which the world comes into existence and expires repeatedly. Although the cyclical nature of time stands on the principles of continuance in rest and return, it also represents a challenge to turn to the future. In this way the statue The Seekers becomes the objectification of the myth of eternal return.