On one Saturday night with a full moon, when there was also a lunar eclipse, at the 8th station of Kristek Thaya Glyptotheque in front of Jan’s Castle at the Black Thaya, there was a happening in which Lubo Kristek once again shifted the boundaries of his experiment. He brought the spectator to a narrative presentation in a landscape which was also a ritual of transition, a ceremony where the social status of some participants changed. The happening was a multiple wedding.

In the first part of the happening, historical figures from various periods, for example Napoleon Bonaparte, Albert Einstein, Adolf Hitler and Sigmund Freud met on the large grassy area in front of Jan’s Castle with characters from a broad range of the social spectrum. In the crowd, a priest bustled around with a nun, a ballerina danced with a black figurine, a policeman microchipping the high-spirited passers-by, a mother with a child in a pram on whom she put a gas mask, white coated orderlies at Freud's couch and many others. It was as if the boundaries between the separate times and spaces had dissolved, and the chaotic clutter where everything was happening at once was a testimony to our epoch. The characters desperately tried to communicate using telephone receivers, but instead of communication, there was just ever greater noise consisting of lonely calls. A confusion of Babel in spite of the fact that everyone was speaking the same language. Has language ceased to fulfil its function? 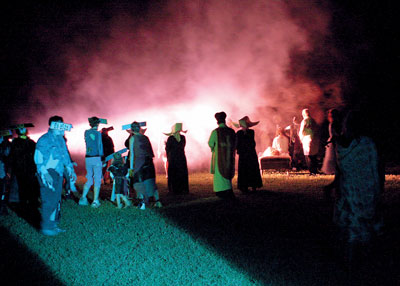 All of a sudden on the other bank, a massive burning wheel appeared and rose up, and everyone was struck dumb. The internal strife of the observers was projected into the red sun, from which glowing tears flowed. The society set forth for this phenomenon in a procession over the long distance to the other side of the river. The suggestive picture of the figures’ moving shadows was terminated by the explosion of the pram with the child. The remnants of hope in the renewal of the race disappeared with the last sparks of the explosion dropping on the surface of the Black Thaya.

In the meantime, surreal dreamlike creatures appeared on the river and approached the bank slowly. A three-metre long striped fish with many breasts, a double being with hollow body centre, a reversed figure with head at the surface, a male figure with seven penises... This surreal world arriving calmly on a raft contrasted with the hectic previous world. The beings left the raft and set off for the interface of the two elements – the water and dry land. At the bank, they started to notice each other, to get to know each other through touch and sound. Two winged Pegasus horses emerged from the dark, bringing dynamism to the events and drawing other characters on a cart. Hieronymus Bosch, with a funnel on his head as the father of creativity, and Bountiful Autumn stepped from the cart and joined the seven pairs of surreal beings in matrimony. In their naturalness, two naked girls assisted during the confirmation of marriages and helped the surreal beings to put their signatures in an open shell. The words of Hieronymus Bosch carry to the spectators and sound like cosmic music. The word changes the world, the couples enter into matrimony. In the end, the awakened fantasy world returned to the deep. The moon emerges from the eclipse. 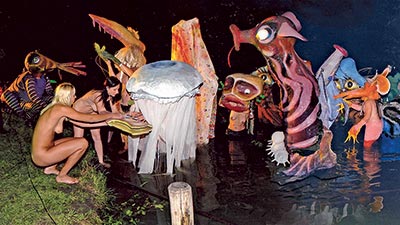 The happening was a true wedding. For the participants, the costume became the key to the transition to a new state. But the event had many other dimensions. It is as if the words of the Czech writer and screenwriter Karel Friedrich (born 1930) from a programme for Radio Free Europe (in 1992) had come true: “If Lubo Kristek had been a filmmaker, he would have evidently had a Fellini-like position. If he were an opera director – and his sculptures really do contain something of the ‘operatic’ – he would evidently be called Peter Sellars. He belongs somewhere in the category of these artists – and this is a truly venerable neighbourhood. It is something of a surprise that the world of theatre has not yet taken possession of Lubo Kristek.” (1) Kristek did not wait, and he “took possession” of the world of theatre himself. He created his own means of artistic expression. The comparison with the American opera director Peter Sellars (born 1957) is fitting. An opera for Sellars is what a happening is for Kristek – a place where spectators and performing artists meet, but also various means of expression intended to break down the stereotypes and discover the contents lying beneath them. Just like Sellars, Kristek does not offer a doctrine, does not designate what people should think or do, but he opens the gates of eternity in order to initiate a search of their own centre. He wants the spectator to take responsibility for his own life and become its active co-creator.

In his “wedding happening”, the artist emphasised the necessity of transformations that occur, for example, during rituals of transition. A society that ceases to develop spiritually and that ceases to re-evaluate the validity of its models falls apart or implodes. If there is a cessation of the attempts to link one's existence to that which goes beyond man, society loses its human dimension.

Lubo Kristek’s happenings cannot merely be “consumed”, because we do not find a clear story in them, a conventional aesthetic or harmless harmony. His events often injure, they turn the aesthetic inside out and intentionally unbalance or break down any continual storyline. Often the intention is to shake the spectator's self-confidence and apathy, to get under his skin in order to turn his attention inwards so that he looks for his own answers.