The next happening was held at the Austrian castle of Hardegg, in the crypt, where the 6th station of the Glyptotheque is to be found. Lubo Kristek’s happenings also bear traits of site specific events – projects intended for a concrete place based on the genius loci. The diversity of the opened places he selects is a direct invitation to the special treatment of each of the events.

On this night, the spectators came down the stairs into an arched room containing a concealed coffin. The "above ground crypt" is on a slope, from one side people do not go down to approach it, but go up, as was the case in the happening. The spectator entered the internal space, and at the same time inward themes reaching the very threshold of human existence opened up to him. Accompanied by music with a rhythm reminiscent of a heartbeat, a flame-shaped red spotlight moved slowly, illuminating the walls or items for a moment. In the background, was a large object of round shapes covered by a light sheet with coloured designs and located on a low sturdy stage made of old bricks. In the foreground, was a wooden cradle. From this cradle led a yarn to a man in a mask sitting virtually motionless in the window and rocking the cradle. The spectators found themselves in a place where the beginning and end of life merge into one. 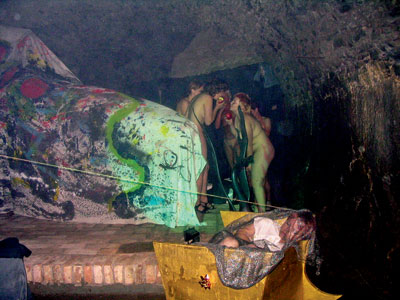 Not far from the concealed object appeared a group of naked girls, who were faintly illuminated by a blue light. In this veil of light, their Venus-like figures appeared as if in a dream, pure and even ethereal. The girls chattered, and the red apples which they brought contrasted with their alabaster complexion. They bit into the apple of knowledge and immediately started to put on nuns' habits. They took the order. Now as nuns they approached the cradle, in which they found a seventh girl, perhaps still a child (throughout his life, Kristek has liked working with the magical number seven). They took her into their arms, woke her up and put her on the ground.

But she is now a woman – the embodiment of the Thaya with a golden glove – who also takes a nun's habit and becomes the mother superior. Black attire concealed the golden light of the glove. She wrapped the cradle in an endless scarf – a fateful mark, the mother superior sat down and started to knit its next part. And so a colourful stream of life associated with the cradle pours out of the character of the Thaya.

In the meantime, the nuns approached the covered object, they touched the sheet, which fell to the ground, and below it a wooden sarcophagus was revealed in the shape of a bird's skull with a cockscomb, the styling of which is evocative of piano keys. This musical fragment points from the open space to the inside of the coffin and links the internal content with the world which surrounds it. The sarcophagus, called Bird Mission, has several storeys, several levels, just like consciousness. Each storey reveals something new, but at the same time that which is to be found in the others remains concealed. The nuns put their hands on the sarcophagus, and under their fingers it pulses back into life. The spectator goes back along the stream of time, and the casket reveals its contents. 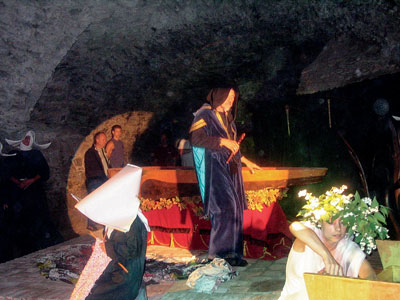 In the upper storey rested the tools of the sculptor, from the middle storey a woman emerged dressed in white and with a floral wreath. She brought a golden branch with two apples, the symbol of Kristek’s tree, which we find in many pictures and also at the first station of the Glyptotheque. One of the nuns fixed the branch to the dark purple cloth on the catafalque below the sarcophagus. After the opening of another intermediate storey, an immobile figure appeared in the lower part. With the touch of a cane, the woman in white brought him back to life, and a man with a whistle stepped out of the sarcophagus. But it is not the Pied Piper with the whistle, who brings death. This character from the happening brings life. A massive dark figure who until now had imperceptibly taken on form in the corner of the room came to life at the sound of the whistle and turned into a dwarf priest who came down from the pedestal.

The woman in white removed another part of the endless scarf from the cradle and wrapped it around the spectators. The yarn of fate from the previous happenings linked the cradle with the audience. In the meantime, the surreal priest went with the mother superior to the rear part of the crypt, where they unveiled a new area. Here the petrified figure of a man with a whistle appeared. The priest released two white doves from the cradle and left. The sarcophagus offered its testimony and closed again. The sculpture Bird Mission is now whole and awaits its owner.

Video: happening at the 6th station of the Glyptotheque