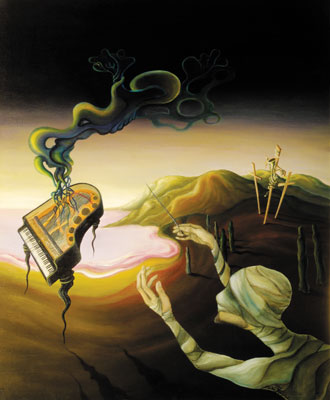 It has become a tradition that the opening of Kristek Thaya Glyptotheque is always in May. Each time it occurs at a different station, and each time some symbolic act is assigned to it. In 2013, it was a musical-drama experiment. Musicians, singers and actors met to breathe life into the chapel at Jan's Castle with the sculpture The Birth and Simultaneously Damnation of the Sphere. The musical improvisation developed from Naděžda’s Chord, which is a discordant harmony of tones that Lubo Kristek heard in his head as a memory of his mother Naděžda. The chord was so persistent that Kristek had to start working with it. He wrote it down in musical notation and started to prepare a sculptural representation of the chord. He also recorded the visual impression in the picture Naděžda’s Chord in the Landscape (1996) with a bandaged conductor under whose baton the animated chord rises from a piano. Naděžda’s Chord appeared in musical form in 2010 in the happening Love in circulo vitioso in finito secundi milenii (in the German town of Landsberg and then in Brno), in an arrangement for symphony orchestra by the composer Miloš Štědroň (born 1942). Here the figure with the baton appears again. In this happening, the symphony orchestra was conducted by a naked female conductor, who led it to a harmonic culmination at the end – a transition to a melodious minor chord.

For Kristek, dissonance is an inspiration, a source of stimuli, the start of creativity. In the creative process it achieves harmony in the end, but for him it is closed. As a result, he then seeks other discordant stimuli and uncharted paths. For Kristek, creation is a constantly open and living process. 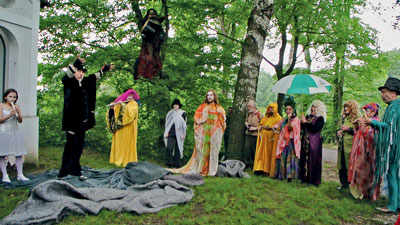 The Surreal Cacophony in 2013 was a continuation of the experiments with Naděžda’s Chord. To the accompaniment of a drum solo from the character Death, who observes everything from the crown of a tree, a whirl of figures came alive around the chapel (the woman-man with pink sack of temptation, the triple-breasted ballerina of Venus-like figure, the secret hobgoblin, the fairy dressed in colanders, the two-headed tree creature knitting an endless scarf like fate which silently passes, etc.) and then unveiled the chapel. Lubo Kristek stepped out of it with his own image in front of his face, and a girl with a recorder came out of it and unmasked him. But under Kristek’s mask the same thing appeared, because he had masked himself with his own identity. Then from the forest, the recorder player lured musicians, who gradually came to the chapel and joined in with the collective harmony. This time, the creator of the chord himself became the conductor and strengthened the harmony until Death came down to the ground. The glyptotheque’s season had been opened.

The opening this year was part of the year-long project Kristek Thaya Glyptotheque – Cultural and Tourist Destination(1). After the happening, there was a christening (using drops of water from the Black Thaya) of the new publication Lubo Kristek: Happening Creation in the Thaya Valley, the godfather of which was the excellent Czechoslovak harpist Miloslav Vildner (born 1933). Visitors could also view an exhibition by the photographer Lubomír Urbánek (born 1949) focussing on the creation of this pilgrims’ way.