Lubo Kristek’s happenings are not based on an Aristotelian concept of theatre. They generally do not have a clear plot, solution or narrative line. They constitute a peculiar semiotic system, a system of signs, meanings or values. Kristek uses his signs as speech, in various contexts, combined in endless combinations. The signs come to life only in combination with others. In his happenings, there are reflections of the world around him, recast by the artist’s own imagination, and his main aim is to awaken the spectator’s imagination. “If the child within man atrophies – he loses fantasy, if mankind loses fantasy – it dies!“ (1), as he himself says.

His scenic metaphors offer many different explanations. But Kristek gives no explanation, and he offers a quite unusual and surprising point of view. He doesn’t try to ensure that the spectator understands what the artist wanted to say. For him, the important thing is that the spectator perceives and experiences, and then processes this experience completely in his own way. 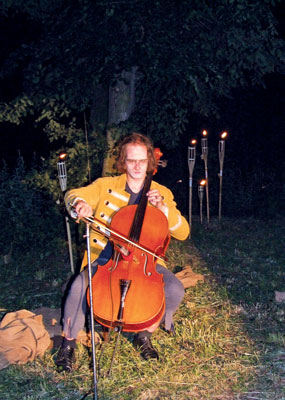 In the 8th happening at Jan’s Castle the spectators arrived in a night landscape of bizarre figures who moved in a space of green shadows. From the trees hung massive wooden sculptures representing the human senses. It is a society that is looking for itself, and in addition to the pleasing tones of a cello, one could hear unclearly articulated human noises. Light appeared, and the society began to develop. The figures include, for example, a painter creating a picture that extends over everyone, the policeman with his truncheon, the priest, the transvestite, the girl with a doll or the king with a crown made of leaves. Humanity jointly creates a breathing whole that blooms. 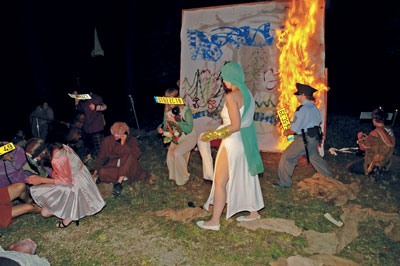 All of a sudden, the king established order with his clear audible commands, and the society moved on. It had wholly succumbed to material addictions – gluttony, Mammon, the immediate satisfaction of desire – organisation increases, the policeman threatens each character and assigns to them a personal identification number and a telephone. The society is now so structured that it stops being fruitful and capable of communication. People hold on desperately to their earpieces, but the connection does not work. They have reached the edge of the abyss. “Quite paradoxically, thanks to its creativity and increasingly sophisticated communication technology, mankind has created for itself a new type of slavery.“ (2) Society is ceasing to function as a whole, it is falling apart; the king falls and is imprisoned in a straightjacket; the work of art as the symbol of culture burns, and the high flames swallow everything they touch, apart from the senses high in the trees. 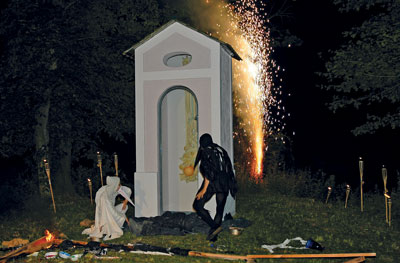 The only one of the characters to survive is the water element – the personification of the Thaya, who brings the cross to mankind’s grave as a memento and strews flowers around. But the fire has uncovered a new dimension behind the picture which was until now concealed. A black and white bird fly about, and behind ruins they discover a hidden chapel, which they reveal. Inside is the ceramic work Birth and Simultaneously Damnation of the Sphere, referencing the indestructibility of absolute energy, the eternal cycle of birth, death and rebirth. The unveiling is accompanied by a light that illuminates the entire landscape. The black and white bird fly off together; the symbolic unity is re-established.

Video: happening at the 8th station of the Glyptotheque