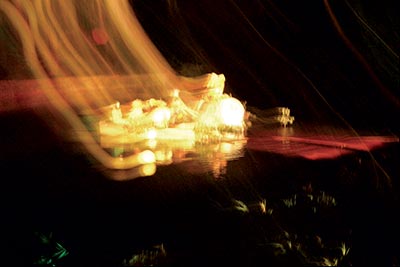 “For Kristek, it is a process that not only comes under the heading ‘here is art’, but seeps into those places where we would not expect art, and where it is all the more surprising and interesting for us. Kristek has undoubtedly broadened our horizons and helped us a little to balance the deficit that we had in the perception of modern art thanks to totalitarian isolation. We are learning a new language that can be used to describe the world and so approach it. We really need this.” (1)

In the works of Lubo Kristek, there has always been a reflection of the world that surrounds him. His creative process blends all the impulses into a peculiar world with its own rules. But at the same time, it is a sensitive barometer of the state of society.

Modern society is often referred to as the electronic, information or consumer society. The new technologies allow rapid and effective data sharing. The postmodern era has also brought with it the predominance of the image and sound at the expense of the written word, a flood of symbols used in the mass media and new virtual worlds. A new phenomenon has appeared. The substitutional symbols of reality have started to live their own life and are increasingly viewed as reality. The picture presented in the media is less and less like reality. An autonomous world of hyperreality is emerging, for example television broadcasting which no longer reflects reality but creates it. And the final result is a blurring of the real and the illusive – it is no longer possible to tell which is which. At the same time, dependency on the illusive world is forming, and this becomes a tool of easy manipulation. Hyperreality is an evolutionary trap. A person longing for authenticity, for real, deep experiences, has an easy and “safe” solution. He can live a substitute life in virtual reality, in the world of TV serials, advertisements, hot news or social networks. If in the flood of ephemera that occupies him fully he gets too detached from genuine reality and he becomes dependent on the illusion, the trap snaps shut.(2) 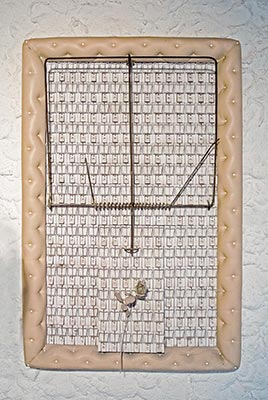 Kristek dealt with the motif of traps in the assemblage Soundproof Aesthetic of Luxuriety (1976). The mother-of-pearl rose symbolises imitation. It is wonderful, but not living and has no fragrance. A person sees a small trap from his perspective, a trap which he avoids, and at the moment when he plucks the rose, a larger trap that he had not seen snaps shuts. The frame of the assemblage is clean and upholstered, like the door to an isolation room in a psychiatric ward. In the soundproof space, no one can hear the cries for help.

Sociologists and anthropologists observe the development of the modern age. They refer to a symbol which no longer refers to the primary original but which constitutes a separate reality as a simulacrum(3). “Hyperreality has interstratified the true world. The simulacrum has become murderously omnipresent.” (4) Hyperreality is characterised by distraction from the true work and emotional experience and the provision of artificially generated substitutes. Modern technology, which could be a tool of education, revolution and liberation, has generally become a dictator in our current concept. The real world and relations are crumbling away whilst the substitutes are flourishing with pathological vigour. Lubo Kristek deals with this development in his own way. It has given birth to the international happening message Requiem for Mobile Telephones, by which he reacts to the phenomenon of “mobilisation”. In this way, the artist pushes back his own barriers, and in the happenings he draws near to rituals of transition. In the happening The Phylogenetic Very Wet Wedding he went beyond this boundary. One can assume that Kristek examines the possibility of renewing enculturation, i.e., the process by which an individual grows into the cultural group to which he belongs.

The era is speeding up, and paradoxically avant-garde theatre and various post-modern fads are often becoming mainstream. Consumer culture constantly hungers after new things. “Well before new companies or artists can establish a reputation, be analyzed and explicated in journals, and evolve their work, newspapers and trendy magazines announce the next ‘must-see’ event. Of the weekend. In such an anvironment, audiences begin looking for trendy events, not challenging encounters. Disposable culture has subsumed the arts as well as consumer products.” (5) 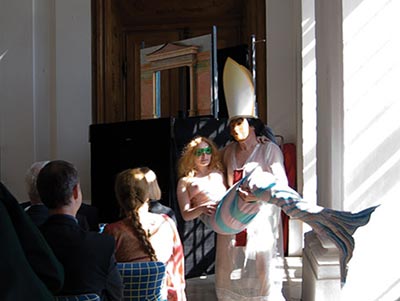 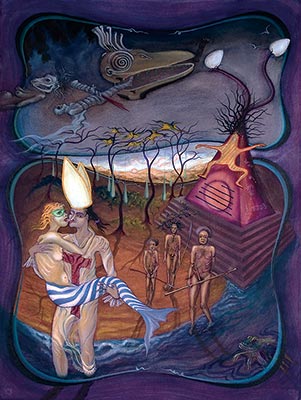 In recent years, other event forms have started to appear in the case of Kristek concurrently with happening creation, evidently in reaction to the consumer perception of art. He has called this form touch. They are more intimate events, which the artist intentionally does not call happenings. We are currently witnesses to the formation of Kristek’s touches. But they do not differ from his happenings only in terms of the number of participants. 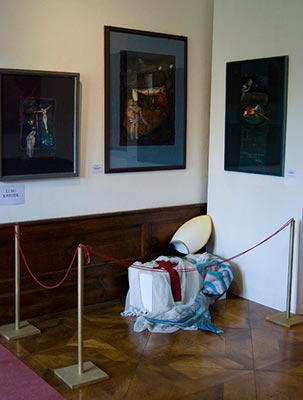 Touches generally happen directly amongst the spectators, often unexpectedly. One of the first occurred in 2010 at the Palace Ruegers in Riegersburg at the opening of the exhibition The Power of Art. Unrecognised by anyone, in a costume and mask of a priest, Kristek passed in front of the astounded speaker, Professor Gerhard Habarta, who was just giving an introductory address about surrealism. The priest carried a nymph in his arms who ate his face. After the exhibition opened, the spectators discovered Kristek’s painting The Consumption of the Priest, and in it the two characters whose living appearance had recently passed before them. Below the painting, there lay the discarded priest's robe and the nymph's tail. In this way, Kristek combined two separated worlds – the world of art and expressions about it. He gets closer to the viewers, he utilises the moment of surprise and in this way also annuls possible expectations. The very word touch expresses that he wants to touch the spectator and awaken him from his lethargy.

So in his current work, he is primarily interested in a true, physical, inspirational meeting. Kristek Thaya Glyptotheque has become a place where many meetings are held, planned or unplanned. So the creator of the pilgrims’ way has prepared not only a space where he can meet people, but also where people can meet him, his work, nature and one another. He also brings other artists and important personalities from other fields to the stations. The Glyptotheque comes to life naturally, and various muses meet at it. It is also a further inspiration for the creator.

At present, Lubo Kristek is opening his own creative space. In his work, there is a strengthening of the line which incites the spectator to create and in which the artist becomes more of a medium than a creator. Individuality is dissolved, and the autorship of the created works is collective. It appears that the individual attempts where Kristek invited someone else to his action painting merge into a more powerful flow in connection with the current trend of society towards lethargy. In the following part, we look more closely at some of the mentioned projects or tendencies linked to Kristek Thaya Glyptotheque.

History and Happenings: Looking for the Hidden Station