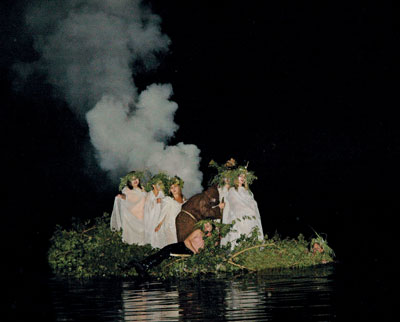 The 9th station of the Glyptotheque is in front of the Chateau Pohansko near Břeclav. The night happening occurred near the lake in front of the chateau. The stage was dominated by a harp that began to awake under the fingers of a harpist. But, all of a sudden, voices from the dark lake responded to its tones. They were heard from afar, as if from a distant unconsciousness. On the other side of the lake, a light came on and female voices started to approach. In the end, a raft appeared on the water with beautiful sirens and the figure of the Ferryman. The sirens could symbolise an attractive and irresistible force, but also knowledge, memory and immortality.

At the same time, events were also occurring on land. The human society, with its uniform masks, suppressed identity and bound hands, blundered about trance-like in a collective primitive rhythm. None of them hears the harpist's playing; their worlds do not come into contact. 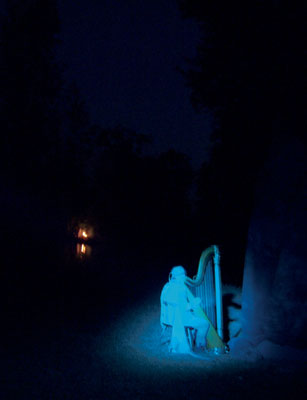 The musician once again played a concert of strings, made contact with the voices from the lake, and the sirens stepped ashore. They surrounded him and swallowed him up in a whirling dance. He listened to the voices and goes off with them to the lake. But as he is departing, he sows seeds. He leaves a trace behind him and the germ of future life. The Ferryman remained ashore, the harpist takes up his place and sails off with his voices. He merges with eternity. 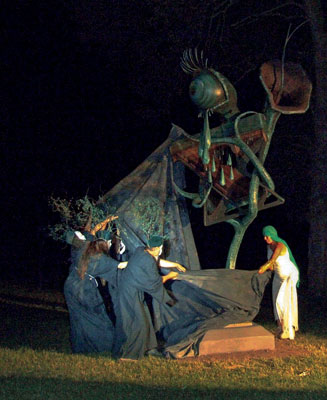 The ferryman brought a new impulse to the old order and freed the society of its chains. He discovered a veiled artefact and uncovered the almost five-metre tall Tree of the Wind Harp. Thaya, now a mature woman, approached the metal sculpture with a string heart and made it play. Gradually more and more joined her, and the entire society started to discover new

Video: happening at the 9th station of the Glyptotheque