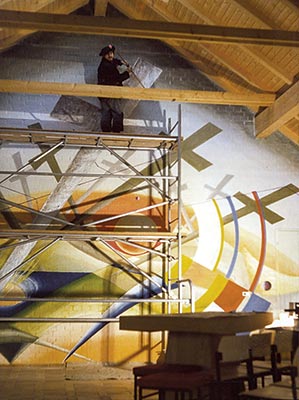 “I myself am nature, every bird and every piece of wood is nature. This is more than a relationship: it is omnipresence. I can only express this through art.” (1)

The concept of the art-philosophical pilgrims’ way Kristek Thaya Glyptotheque matured in Lubo Kristek over four decades of concentrated professional creation. As far back as 1982, the Munich magazine Applaus mentioned some of his striking feats. “In Greifenberg, there is a fountain which he created, in Penzing, he painted the fresco ‘Cross’ in the cemetery chapel, and on the staircase of the Ignaz Kögler Gymnasium in Landsberg, Kristek’s monumental ‘Tree of Knowledge’ thrusts up through the floors to the skylight. In addition to this, there are sculptures in parks and gardens, reliefs and artistic decorations in many private houses.” (2)

The monumental yet sensual dimension of Kristek’s sculptural works was a forerunner of the subsequently created natural gallery of sculptures in the Thaya region in the form of a glyptotheque – a set of sculptures. “His works  of art can be seen in many places to this day: ‘Tree of Knowledge’ – a large-scale sculpture from 1982 – encourages and heartens us the scholars of Ignaz Kögler Gymnasium in Landsberg at the beginning of their school journey. Also, the ‘Monument to the Five Senses’ which was installed in front of the Neues Stadtmuseum in 1992 – a three-metre high hand with nose, eyes, ear and mouth – deserves particular attention. Thus the artist reminds us, during each visit to the museum, that art addresses all the five senses and it should also be perceived by all the senses.” (3) 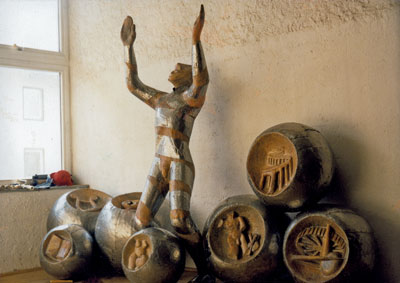 The large-scale architectural sculpture, The Tree of Knowledge, referred to above, which rises through three floors of the building, is an example of the harmonisation of a sculpture with its surroundings and also an example of how to reinforce the impact of a place on a person, which Kristek later utilised in his landscape work. The Munich magazine Steinmetz + Bildhauer wrote the following about this work of art: “Kristek covered the wooden core in strips of noble metal. The fruit of the tree and the branches are also made of metal. (…) It is difficult to imagine a closer and more fruitful unity of art in architecture. Where over the past twenty years in the Rhineland might we find a comparable example in art and architecture?” (4) Kristek also created large-scale works in Penzing and Augsburg, and they were direct forerunners of his Glyptotheque.

In his paintings from the 1970s, we can find the theme of the bridge and road. The road, frequently bordered by the arches of bridges, rises and disappears into the unknown. The artist himself calls it the heavenly highway – it appears, for example, in the painting The Heavenly Highway of Aunt Fränzi (1974–1975). A desire to join and make a pilgrimage to spirituality is reflected in it. Kristek Thaya Glyptotheque, which he built in the years 2005 and 2006, is the vital linkage of the artist's artistic and spiritual development. He linked together the sculptures – in which he achieved monumentality, craft qualities and spiritual scope – in a pilgrims’ way dedicated to the river Thaya. He invites those who visit his sculptures to take a walk through the landscape. 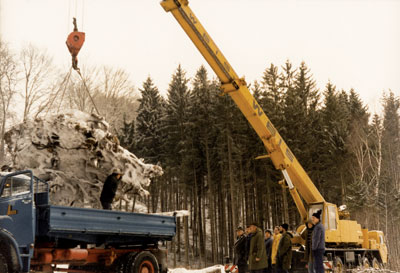 Pilgrimages have been a part of religious traditions since time immemorial. The British cultural anthropologist Victor W. Turner (1920–1983) considers the pilgrimage to be a ritual of transition. “A pilgrim is an initiand, entering into a new, deeper level of existence than he has known in his accustomed milieu.“ (5)  Modern society has turned its back on many traditions, but of course in the postmodern era the interest in tourism and a link to old customs is growing, because in this alienated, urbanistic era people miss the deep experiences beyond the bounds of the day-to-day world. Tourism is often associated with the commercial perception of travel, but it can also enable a multicultural meeting, meeting with the unusual or with one’s own self. In this sense, postmodern pilgrimages offer much, depending on who the pilgrim is and what he expects from his journey. 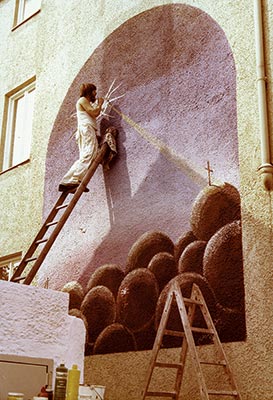 One important aspect of pilgrimages is common sharing. These tendencies are expressed in the case of Kristek most strongly in the happenings, where a common experience and often a common journey to the venue bonds the visitors and performers together and dissolves the boundaries between them. When the happening A Cart Full of Tones was held in 1994 in Podhradí nad Dyjí (later the 4th station and centre of Kristek Thaya Glyptotheque), the Czech writer Jaromír Tomeček (1906–1997) made a speech about the artist which has become more and more valid in the general context over time: “Socrates said that at some time long, long ago, people were symmetrical. They had no obverse, no reverse, they had no front or back, and in this symmetry, they were so strong that they threatened the gods. And so the gods of Olympus went to Zeus and said: ‘Behold these people, whose glory reaches Olympus itself.’ And so Zeus succumbed to the entreaties of the gods, he took the people and, as Plato says, cut them in half as a sorb-apple for pickling. And the people were halved. And if two halves which once belonged to each other merge, an individual is created who threatens the gods. And this individual, this person, is endowed with love. Love cannot be alone. Love is always with faith and hope. Faith in life, hope in the world and love for the country - this is the phenomenon which rules mankind if an apostle of this type appears. And this apostle in this place is our friend Lubo Kristek. Lubo Kristek brings what man has needed since time immemorial – he needs to feed his soul.” (6)  Tomeček foretold the future direction of the artist, who focuses in himself on probing the depths of the human soul. Kristek’s attempts to provide that “food for the soul” and create a space for meeting, discovering and going beyond boundaries crystallised through the creation of the tri-national Kristek Thaya Glyptotheque. In it people can travel to places where the genius loci is reinforced by a dominant sculptural feature. The interpretation of each of the places is linked to the uniqueness of the genius loci. So each station has its own inimitable spirit. This route offers the pilgrim a view into his own inner dimension and reveals to him the original roots of creativity. And so paradoxically, a person on long journeys seeks out his own identity.

“It is not presumptous to claim that  Lubo Kristek is one of the few artists who followed their creative callings now for almost a lifetime and set particularly sustainable momentums.” (7)

6 Extract from speech on video recording from the archive of the Research Institute of Communication in Art.