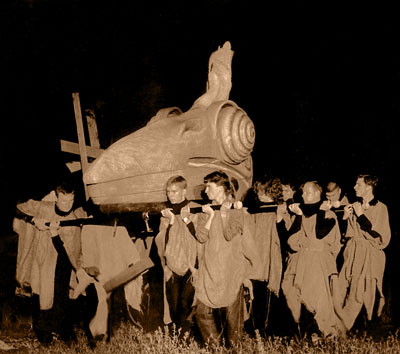 The wooden sarcophagus Bird Mission (1998), which the artist prepared for himself as his final casket, has already flown around the world on several night events. For example, in the double happening Love in circulo vitioso in finito secundi milenii, which was held in 1998 in Landsberg and then in Brno, Kristek rested in this magical casket for forty minutes and then, in the end, stepped out once more into the light.

“The outwardly eccentric appearing artist with rich inner experience, a broad view and humility towards life is fully occupied with the original project of Kristek’s Thaya Glyptotheque. When you speak to him, he allows you to peer into his fantasy world for a while and then releases you gently back to reality. You approach him as an incomplete pupa, and leave as a wonderful butterfly.” (1) 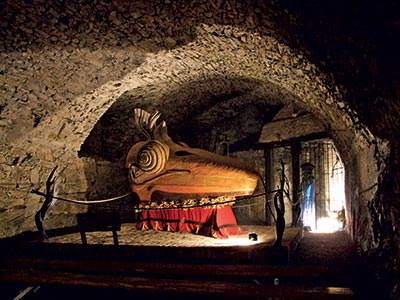 Man undergoes intensive preparation for death, even in the course of his life. The interest in death and dying is associated with the uncertainty of the fate of human existence and the reality that death was omnipresent in day-to-day life even in the middle ages. Man has been accompanied by such ideas as memento mori (remember your death) and mors certa, hora incerta (death is certain, its hour is uncertain), which reminded the mortal not to waste time, nor strive for worldly goals and not to accumulate material wealth, as these are expressions of vanity and folly, for one can take nothing material from this world. In creating his Bird Mission sarcophagus, Kristek followed on from this idea. The cenotaph, a symbolic tomb, expresses his preparation for death and meaningful lifelong utilisation of life. In the modern world, dying and death are virtually excluded from life. Seeing the dying and the dead is no longer a common matter. To speak of death is considered morbid and distasteful. In this way, the deafness and blindness with regard to death shunts the dying and preparation for death behind the scenes of social life.